And It Will Be a Beautiful Life 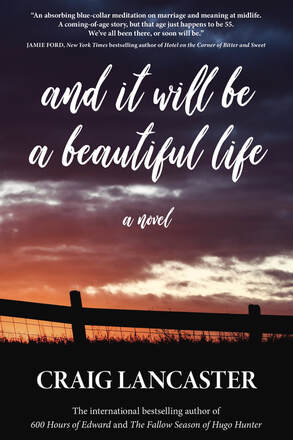 Synopsis: Max Wendt has a family . . . but it's sliding sideways, and he has been complicit in its faltering. His wife and his daughter have pulled away from him amid his frequent absences, leaving him to bridge the distance between what he remembers and the way things are now.

Max Wendt has a job . . . but it carries him away from home most of the time, and its dynamics are quickly changing. There's a surprising new hire on his pipeline crew, strife among coworkers, and a boss whose proclivities put everything in peril.

Max Wendt has a friend . . . but this odd man Max meets during his travels perplexes him, prods him, pushes him, and annoys him. He sees something in Max that Max can't see in himself, and he's holding tight to his own pain.

​Max Wendt has a problem . . . More than one, in fact, and those problems are flying at him with increasing velocity. Can someone who has spent his life going with the flow arrest his own destructive inertia, rebuild his relationships, and find a better way?

“An absorbing blue-collar meditation on marriage and meaning at midlife. A coming-ofage story, but that age just happens to be 55. We’ve all been there, or soon will be.” — JAMIE FORD, New York Times bestselling author of Hotel on the Corner of Bitter and Sweet

“It’s a generous, bighearted look at relationships—romantic and otherwise—laced with sly humor and keen insights, and one hell of a payoff at the end. Lancaster’s best yet.” — GWEN FLORIO, author of Best Laid Plans and the upcoming The Truth of it All

“Craig Lancaster’s latest novel, And It Will Be a Beautiful Life, is full of just that: life. Its tangles and complications, its ruts and wrecks, its lights and losses—and yes, its beauties.” — JOE WILKINS, author of Fall Back Down When I Die and When We Were Birds

“Among Craig Lancaster’s gifts, I’ve come to appreciate most his ability to take the mundane and elevate it to the level of art; how he can spin quotidian threads into such colorful, surprising patterns; and, in the case of And It Will Be a Beautiful Life, how he can chase a pig through an ordinary life and find, along the way, such extraordinary seams of beauty, friendship, love, regret, tragedy, and triumph. You’ve really got to read this book.” — ALLEN MORRIS JONES, author of Sweeney on the Rocks and A Bloom of Bones

The adventures of Max Wendt, criss-crossing the country and his life, goaded on by a strange new friend, are heartbreaking, funny, well-written, and entirely human.” — JAMIE HARRISON, author of The Center of Everything and The Widow Nash

“Lancaster’s great achievement is to pull us into Max’s world and make us his ally, even when we want to take him by the shoulders and shake some sense into him. The key is in the title’s verb. Life, indeed, will be beautiful, but Max understands that only when he sees it in the lives of other people around him.” — LARRY BAKER, author of A Good Man